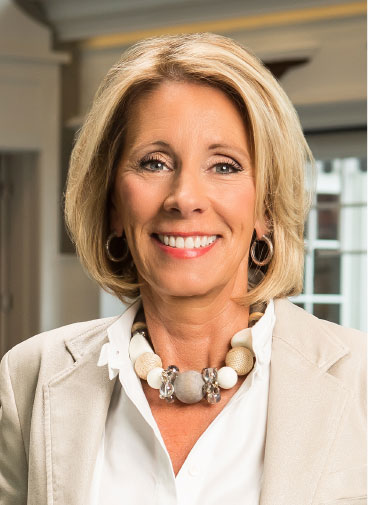 Meet the new Secretary of Education:

According to the Center for Public Integrity, in a 1997 op-ed  [BETSY]  DEVOS . . . defended her family’s political contributions. “My family is the largest single contributor of soft money to the national Republican party  … I have decided, however, to stop taking offense at the suggestion that we are buying influence,” the piece reads. “Now, I simply concede the point. We expect to foster a conservative governing philosophy consisting of limited government and respect for traditional American virtues. We  expect  a  return  on  our  investment;  we expect a good and honest government. Furthermore, we expect the Republican Party to use the money to promote these policies and, yes, to win elections.”
_______________________
Conniff, Ruth. “Public School Shakedown.” Progressive 77.8 (2013): 18-19.
A fundamental struggle for democracy is going on behind the scenes in statehouses around the country, as a handful of wealthy individuals and foundations pour money into efforts to privatize the public schools.
___The implications are huge. But the school privatizers—and their lobbyists—have so muddied the waters that the public does not get a clear picture of what is at stake.
[. . . .]  And the voucher program is destined to grow. Just look at Milwaukee, where vouchers have been in place on an “experimental” basis for twenty-three years. Despite test results that show that voucher students fare worse than their public-school peers in math and reading, the “experiment” is never over. And now Walker is upsizing this failed program to the entire state.
___BETSY  DEVOS,  the head of the American Federation for Children, criticized Walker for not going far enough, denouncing a 1,000-student enrollment cap on vouchers that is likely to be temporary. Stay tuned for a no-cap voucher plan.

publicschoolshakedown.org   A Program of The Progressive

The election of Donald Trump, and his subsequent nomination of  BETSY DEVOS  for Secretary of Education, may turn the tide in favor of private control of public education. The President-elect promised during his campaign that his administration will spend billions on market-based school choice in the first 100 days. If these funds are taken from federal Title I dollars, Trump, during his first year as President, could cripple the public education system as we know it today [. . . .]
_______________________
Brown, Simon. “The Great Voucher Fraud.” Church & State 66.9 (2013): 4-7

[. . . . Voucher proponents] would have Americans believe that they are something like modern Martin Luther King Jrs., seeking enhanced opportunities for all. They claim that parents should be able to use taxpayer money to educate their children as they see fit rather than being locked into certain schools, and they say taxpayer-funded “scholarships” – a euphemism for vouchers – are the only way for low-income families to escape failing public schools.
___But the reality is far different. Despite the best efforts of “school choice” advocates to spin the effectiveness of vouchers, decades of accumulated evidence paints a different story: Vouchers do not improve educational outcomes . . .
[. . . .] Powerful groups like the American Legislative Exchange Council, the Heritage Foundation, BETSY DEVOS‘ American Federation of Children and other far-right groups that hate public services provide a rich funding stream for the voucher movement. Organizations like these talk about helping children. But their real goal is to crush teachers’ unions and shift education from the public to the private sector, opening up potentially billions for rapacious for-profit firms that would love nothing better than to “Walmart-ize” American education.
___Joining them are fundamentalist Christians, who believe public education is “godless”. . . .

In March, a Michigan multi-millionaire named Betsy Devos announced the formation of a new national group to fight for voucher subsidies for religious schools and other forms of “school choice.”
___”Political gamesmanship and special interests should never stand in the way of providing children with access to great schools,” DEVOS fulminated in a press release announcing the creation of the American Federation for Children. “We know that it takes smart public policy – and political backbone – to bring about the types of school choice programs that provide families with better educational opportunities. That is why we have created the American Federation for Children.”
[. . . .]   As the press release mentioned, the American Federation for Children was just a rebranding effort for a group previously known as Advocates for School Choice. Why the name change? DeVos, a fundamentalist Christian and far right political activist, probably wanted to jump-start the pro-voucher drive with at least the appearance of something new. At the same time, the revised moniker was a slap at the American Federation of Teachers, a teachers’ union much loathed by DeVos and her allies.
___The real news in the release was the growing prominence of Devos as a linchpin in the voucher movement. Although hardly a household name, if Betsy DeVos has her way, every American could feel her reach: DeVos’ goal is nothing short of a radical recreation of education in the United States, with tax-supported religious and other private schools replacing the traditional public school system. DeVos rarely states it that bluntly. Instead, she crouches behind the euphemism of “school choice” and pretends to be a kindly advocate for downtrodden youngsters trapped in public schools described as “failing.”
___Driven by a relentless faith in ultra-conservative religion and the privatization of public services, DeVos and her husband, Dick, who is best known as the former president of Amway, are pouring millions from their personal fortune into a nationwide voucher push. They’ll be bringing plenty of antipublic school allies along for the ride – chief among them the Walton Family Foundation, an entity operated by the heirs of Sam Walton, founder of Wal-Mart.
_______________________
Apple, Michael W. “Understanding And Interrupting Hegemonic Projects In Education: Learning From Stuart Hall.” Discourse: Studies In The Cultural Politics Of Education 36.2 (2015): 171-184.   Source . . .
[. . . .] behind a good deal of the Right’s ideological assemblage was the creation of a constitutive outside, a set of ‘raced others’ who were seen as a form of pollution and danger for which only the neoliberal market could provide an answer.
___This, for example, continues to be clear in the USA, where neoliberal proposals for marketization and privatization in education such as voucher plans may be couched in the language of escaping from bad state-supported schools, but the reality is that they constitute an attack on the state and on the entire public sphere. While the implications of these attacks are deeply troubling, the reality is that they have been more than a little successful in changing our common sense and in offering what are seemingly workable alternatives to even dispossessed groups. The power of the neoliberal agenda is visible in the hard and partly successful work that the Right has done in convincing many people, including some Black and Latino/Latina activist groups, that neoliberal policies offer a more realistic hope for the future of their children than, say, existing state-supported schools.
___Of course, in the face of this set of desocializing policies, the radical transformation of the public sphere into simply one more extension of the private is of no little concern. . . .